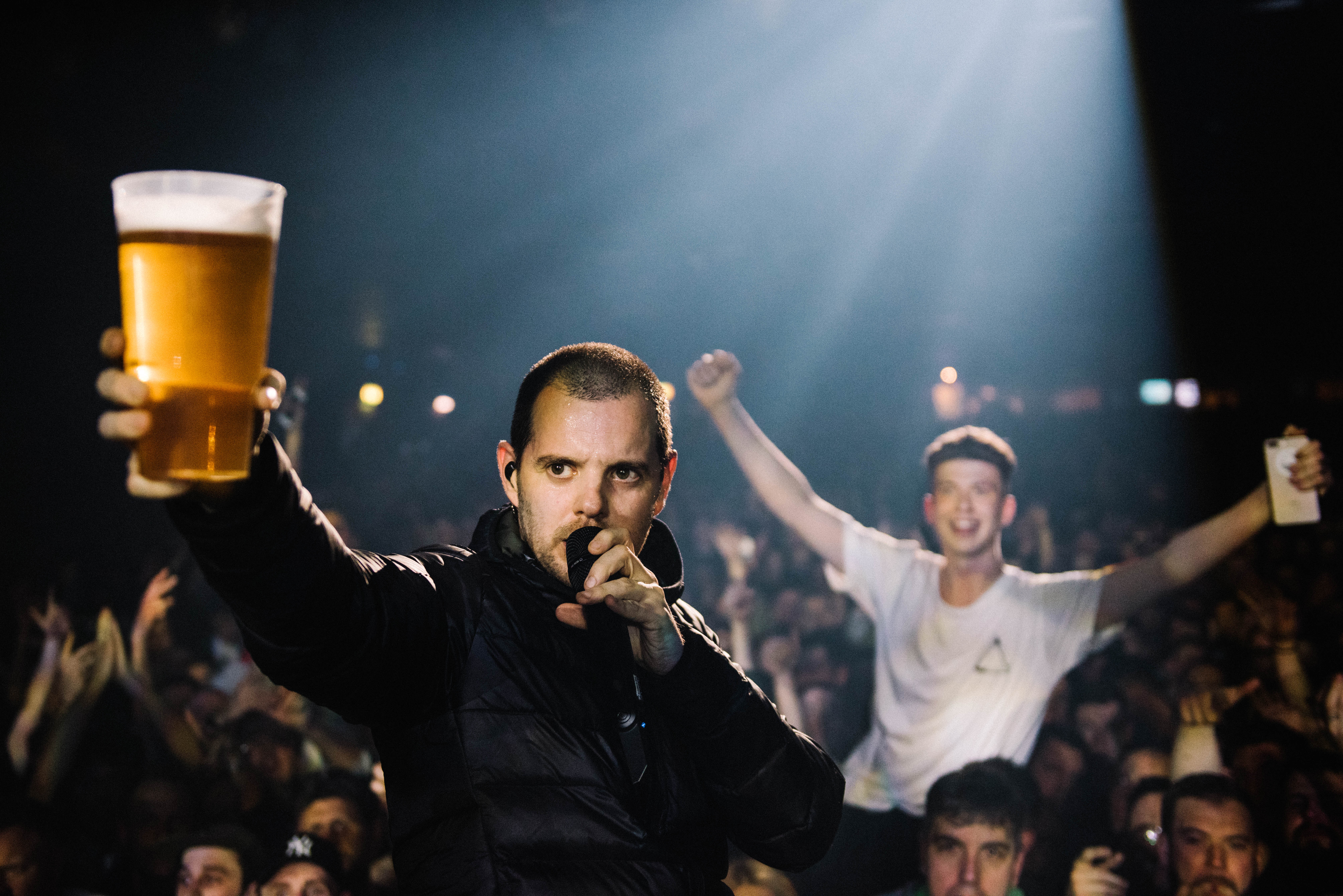 TONGA, the balloon filled rap, grime and dubstep party by Mike Skinner and Murkage Dave, had been a series of shoobs to remember. Copenhagen to Manchester to Berlin. Brum to Brixton. Usually arriving with a coterie of legendary UK figureheads and gobby upcomers in tow, like Kano, Giggs, Jammer or Jaykae, the pulsating essence of the nights needed to be immortalised.

The original plan had been to release a TONGA album. But as night moved to day, and day moved along to night, it… just didn’t happen. Instead, a new mixtape titled None Of Us Are Getting Out Of This Life Alive steps up to take its place. Recorded between work on the accompanying film to The Streets new album, it is the unpredictable sonic continuation of those parties.

Taking in UK Funky and twilight zone UK rap, and with guest spots ranging from Grammy nominated psychedelia sovereign Tame Impala to cult south London rapper Jesse James, as well as 2019’s key-fiend-friendly drum’n’bass collab with Chris Lorenzo, None Of Us Are Getting Out Of This Life Alive is the most eclectic and highly collaborative collection of songs from The Streets yet. Or as Mike puts it with characteristic distinction: “it’s really just a rap duets album.”

Every track on None Of Us Are Getting Out Of This Life Alive has one if not two guests, who, though underpinned by Mike’s distinctive lyrical flair, usually perform atop a genre or sound not previously explored within the realm of The Streets. “You know that thing where if you wore it the first time round, don’t wear it the second time round? I would never put on Aquascutum at this point in my life. It would be stupid, a pastiche of what I did twenty years ago. For all of us. Whereas now I’m going back and I’m picking things that I didn’t pick before.”

The inclusion of, say, Mercury Prize nominated punk group IDLES (who perform what Mike describes as a sea-shanty tinged track inspired by an overnight ferry to Dover) and teenage wünderkind Jimothy Lacoste help ground things firmly in the here and now. But there are familiar faces of the past too. Birmingham legend, Dapz On The Map, pops up on merky rap track “Phone Is Always In My Hand”. While Rob Harvey, previously of The Music and Skinner collaboration The D.O.T, tunes into pensieve penultimate track “Conspiracy Theory Freestyle”.

“The guests had to be into me, as much as I was into them,” jokes Mike, of the featured artist selection process. Really, though seemingly disparate on paper, the acts on the record are connected by their singular talent for “talking about normal stuff.” “All the different things I’ve tried to do, they’re who is doing that now.” “But instead of talking about abstract emotions on this record, I’m talking about things and objects and details.”

Couched in those UK and Euro wide experiences with TONGA, this results in tales of hardly partying, but partying hard. The path to excess. The morning trying to climb in under the curtains as you’re busy putting the world to rights. Like anything that happens between the nightclub and the bus home, there’s as much connection as disconnection in this world; as many new relationships forged as there are trails left behind from the ghosts of previous companionships past.

Communication, or lack thereof, plays a huge part in this present-day experience. “One thing I’ve ended up doing is talking about being on my phone,” says Mike. “It was very easy on my first album to say, well: where am I? I’m in a pub. I’m at home. I’m in a betting shop. I’m getting a kebab. It felt fairly straightforward and no one had really written about it. Whereas when making this record, everything now basically happens on your phone.”

These dual themes of nightclub and connection land the record in the simple yet eternally complicated prism of human interaction. “You’re ignoring me but you’re watching my stories”, on “Phone Is Always In My Hand”, is a black comedy mantra of our times. Same goes for “every girl has a dude in her inbox talking to himself” on the Oscar #WorldPeace featuring “The Poison I Take Hoping You Will Suffer”. References abound to missed calls (on opening track “Call My Phone Thinking I’m Doing Nothing Better”, Kevin Parker sings, trance like, about neglecting to call someone back) and “five minute” journeys (the kind where you lie about leaving the house).

The mixtape is the seventh full length from The Streets, who broke through in 2002 with the Mercury Prize nominated Original Pirate Material – widely regarded as one of the most influential British albums of the decade. Four BRIT Award nominations came that year too, for best album, best urban act, best breakthrough artist best British male solo artist. “Dry Your Eyes”, from 2005 follow-up album A Grand Don’t Come For Free, won an Ivor Novello for Best Song Musically And Lyrically. There was also a BRIT Award win that year, for best British Male Solo Artist.

Since then, and across his other records and guest features, Skinner has collaborated with a whose who of British music – from Kano, to Pete Doherty, to Giggs. In recent years, and with his Mike Skinner LTD label, he’s worked with up and coming acts like Flohio, Ghetts and Grim Sickers. When The Streets announced a comeback tour in 2017, tickets for the dates sold out in less than a minute. It’s all testament to the impact The Streets have had, across several generations of musicians.

And so, despite its humble mixtape beginnings, None Of Us Are Getting Out Of This Life Alive is a precise and very human body of work from a modern UK music pioneer. Emotionally poignant, full of one liners, club ready. More than anything, it’s exciting – a call back to those fun and responsibility free evenings at TONGA. Yet “the result is much more than I thought it would be. It’s become a real album,” says Mike. And so, as the new decade begins, so too does a new era for The Streets.